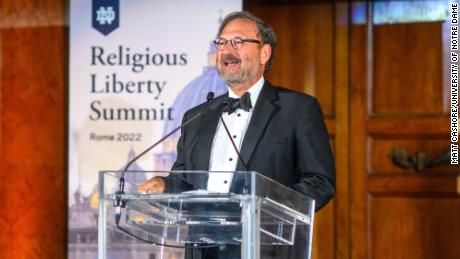 Supreme Court justices worry about the future — and point

The justices are mostly on their summer recess now, having left behind a trail of bitter conservative-liberal splits on issues that will reshape how Americans live their lives when it comes to reproductive health, religious liberty, the environment and gun rights.

In those opinions and in public comments, members on both sides of the ideological divide are expressing reservations not about their ability to interact civilly — but about the court itself and its future.

“I think people are rightly suspicious if one justice leaves the court or dies and another justice takes his or her place and all of a sudden the law changes,” Kagan added. “It’s like: what’s going on here? That doesn’t seem like law.”

On Thursday, ideological opposites Justice Sonia Sotomayor and Amy Coney Barrett appeared together for the first time for a public talk, speaking at the Reagan Institute’s annual summit on education. Carrying on a tradition initiated by retired Justice Sandra Day O’Connor they stressed the importance of civic education and civility on the bench during their hour-long chat which was pre-taped.

“Showing that we can disagree on the issues and the merits without being nasty is one of the tributes to the way we do our business,” Barrett said.

“Our disagreement on political issues and important constitutional issues doesn’t diminish the value of who Justice Amy Barrett is in my mind or to me,” Sotomayor added.

But their joint appearance could not dim the tensions on the high court and the sentiment that its institutional integrity is under threat.

Before the cameras on Thursday, for instance, Sotomayor stressed civility. At oral arguments last December, however, her comments were pointed when she suggested that the only reason the court was preparing to overturn Roe v. Wade was because of the recent change in the court’s membership.

“Will this institution survive the stench that this creates in the public perception that the Constitution and its reading are just political acts?” she asked.

In another case dealing with claims of excessive force at the hands of a border agent, Sotomayor dissented, saying the court’s change of direction was the result of a “restless and newly constituted court.”

The public polls come after a draft opinion overturning Roe was leaked to Politico in May. A few weeks later, Justice Clarence Thomas discussed the leak, and in doing so shifted tenses to suggest that the unprecedented move had fundamentally altered the court, suggesting the days of trust are in the past.
“We never had that before,” the George H.W. Bush appointee said, noting that the members of the court trusted each other in past years. “We may have been a dysfunctional family, but we were a family and we loved it.”

“I mean you trusted each other, you laughed together, you went to lunch together every day and I can only hope you can keep it” Thomas said.

He referred to a quote attributed to Ben Franklin as he was supposedly leaving the Constitutional Convention in 1787.

“Was it Ben Franklin who said ‘we gave you a republic if you can keep it'” Thomas asked rhetorically. “Well, I think you have a court and I hope you can keep it.”

At a separate appearance in Atlanta, Thomas suggested that the leak was a symptom of an effort to destabilize the court.

“You cannot have a free society,” he said, without stable institutions.
Chief Justice John Roberts expressed his own concerns about the future of the court and its legitimacy. Although he sided with his conservative colleagues in cases concerning gun rights, the environment and religious liberty, he moved more cautiously in other areas at times, fearful that his colleagues on the right were hurting the institution of the court by moving too far too fast.
In Dobbs v. Jackson Women’s Health — the case that overturned Roe — Roberts said that his conservative colleagues had gone too far. Roberts agreed that Mississippi’s law barring abortion after 15 weeks (already a reduction to the standard of when a woman could obtain an abortion) should stand, but he did not agree that the nationwide right to an abortion should be eliminated.

In a solo concurrence, Roberts chided his conservative colleagues for failing to adhere to a fundamental principle of the law: judicial restraint.

“Surely we should adhere closely to principles of judicial restraint here, where the broader path the Court chooses entails repudiating a constitutional right we have not only previously recognized, but also expressly reaffirmed,” he said.

In a discussion at a judicial conference in Big Sky, Montana, last week, Kagan didn’t hold back when asked about the public perception of the Supreme Court.

“We have a court that does important things and if that connection is lost — that’s a dangerous thing for the democratic system as a whole,” she said.

Kagan was careful to say that she was not targeting any one case or “series of decisions.” But it was lost on no one that she was repeating themes the liberals had aired in dissent last term.

“The way the court retains its legitimacy and fosters public confidence is by acting like a court,” Kagan said in stressing the need to respect precedent.

The liberals in the joint dissent in the Dobbs case made the same exact point when the court overturned Roe.

Castigating the majority for a “cavalier approach,” the liberals noted in their opinion that respect for prior opinions is a doctrine of “judicial modesty and humility.”

“Nothing — and in particular, no significant legal or factual change — supports overturning a half-century of settled law giving women control over their reproductive lives,” the liberals wrote. They said that the court had overturned Roe “for one reason and one reason only: because the composition of this court has changed.”

In Montana, Kagan also said that the justices on the court — both conservatives and liberals — should stick to the “consistent application of methodologies that constrain and discipline judges.”

She spoke about methodologies embraced by the current court called “originalism” and “textualism” — doctrines championed by the late Justice Antonin Scalia. Under the theories, the Constitution should be interpreted based on its original public reading and judges should stick to the words on the page when interpreting statutory texts, and not delve into areas such as a legislator’s intent.

Kagan said that if a judge chooses to rely on a methodology, she should do so consistently.

“So you can’t be a textualist on Monday” she said, and then abandon the doctrine in a future case.

Tellingly, Kagan made that exact point when she penned a dissent last term in a case that stripped the EPA’s authority to regulate power plant emissions, accusing the majority largely ignored the actual text of the Clean Air Act.

“The current Court,” Kagan said, is “textualist only when being so suits it.”

The next term begins in October, where there is no sign tensions will let up. On the docket so far: voting rights, religious liberty, affirmative action and immigration.

On Thursday, Barrett suggested that the justices will continue to strive for civility. “It’s like a marriage, we have life tenure so we get along and that means you are not going to rupture relationships with people that you are going to be spending your careers with,” she said.