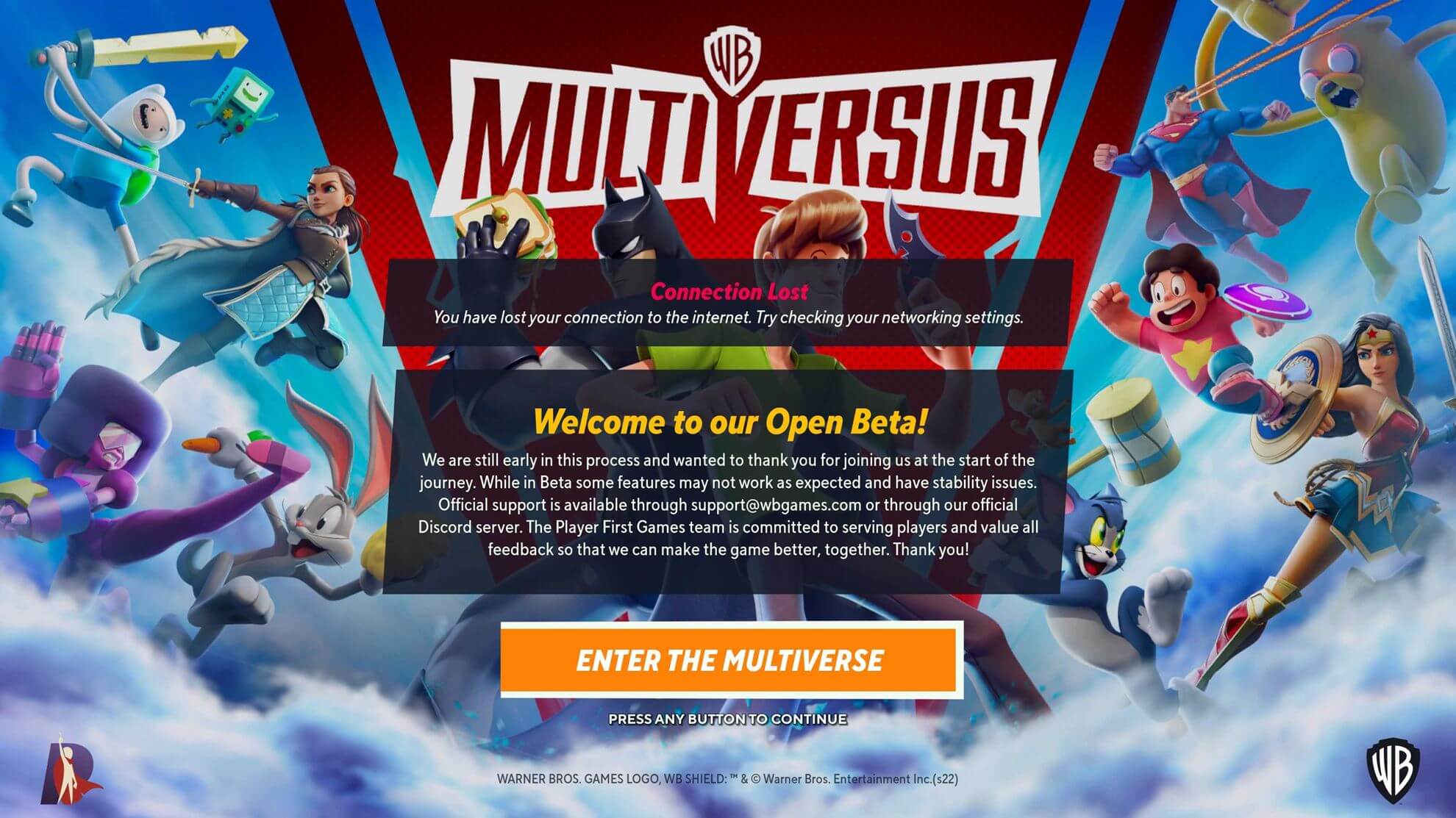 Multiversus is a 3D arena platformer fighter game that offers 2v2 and 1v1 battles. The game features a total of 19 playable characters so far, with New Characters in Multiversus possibly on the way. These include iconic Warner Bros Franchises like the addition of Tom & Jerry as well as Finn and Jake from Adventure Time. Even DC Comics characters like Batman and Harley Quinn join the crossover madness. The only hindrances to enjoying these heroes are the likes of the Lost Connection error that can cause the online not to work as intended in Multiversus.

So today, we are going to break down some of the known issues of the Lost connection error in Multiversus that ends up causing the online not to work and function properly. Before we begin, we highly suggest checking our comprehensive Multiversus character tier list to learn more about each one in detail.

What Is The Connection Lost Error In Multiversus?

So as provided by reports from Multiversus players from around the world, one of the root causes of the online not working as planned is due to the Lost Connection error. It is generated as you attempt to log into the game.

The error provides little to no context besides blaming your internet connection, as shown in the image above. Several reports have led players down a rabbit hole to try different types of fixes to be able to solve them. There are also some unconventional workarounds discovered that helped a few players log in successfully without any problems.

However, it should be noted that the reasons for the Online component malfunctioning and not working properly in Multiversus mainly arise from a couple of other causes, too, which doesn’t seem to surprise anyone.

The core elements of the game are primarily focused on online multiplayer, and there are various similar problems like in other multiplayer titles such as Apex Legends Crashing or the Weasel Error in Destiny 2.

So before we discuss the few different solutions to fixing the online aspect of the game, we need to entail some of the other known sources where the lost connection can originate from in Multiversus. Most of these are pretty self-explanatory to understand and will give you a basic idea of how to solve this whole problem.

The Causes Of The Online Not Working in Multiversus

The online aspect of misbehaving and not letting users play the game in peace can have a couple of reasons. Most importantly, you should keep in mind that the game launched just a few days ago, so bugs and glitches are bound to be found sooner or later. The causes of the online errors in the game include:

These causes were all identified and reported by players on the Multiversus Support Forums on Steam. It is unclear when the developers or WB will acknowledge the issues with much more focus. Despite that, we will now discuss 5 ways how you can try to resolve the lost connection error along with any other errors in Multiversus.

Aside from the “Connection Lost” error, the connection issues that cause the game not to work can happen amidst your matches and even when you try to log into Multiversus, as previously mentioned. The fixes that we have listed for you might just help you resolve them from completely occurring.

They are not too complicated, neither they require you to do some heavy work. The solutions are mostly basic workarounds that most video game players should already know about in simple terms. Since WB fails to mention any helpful solution to fix these unsolvable problems, we sincerely hope these methods work for you.

Quite possibly, one of the oldest tricks in the boot when it comes to resetting your games is either restart them or give the console or system a fresh reboot. This method is straightforward enough and makes it so that the game runs again in a new state. You should try restarting the game a couple of times before restarting the system.

It is also worth pointing out that rebooting your console or PC will allow them to function much more smoothly if they had any issues previously by running the game. It will prevent any problems like freezing or the Operating System getting stuck momentarily, which can be infuriating to deal with in most of these problematic games.

Furthermore, players can opt to “Power cycle” their hardware. You can easily do it by fully turning off your console and removing the power cable from the power output. Give it a few minutes or so, and then boot up the system from scratch.

It will especially help consoles run better since they have a restrictive operating system. Now head back into the game and check if the online multiplayer is working up to par or not in Multiversus.

Multiplayers games like Fortnite and Lost Ark are heavily dependent on their connection status with the backend servers that the developers have created. These servers allow the online component in games to function accordingly to provide a streamlined experience at all times for the player base.

However, more often than not, these servers can potentially go under downtime or maintenance routines for a scheduled time. They can also get overloaded, which then ends up disrupting the ecosystem of the game for every single player. It is because most video game servers can only allocate a specific amount of users.

Players of Multiversus can head over to the Official WB Games Support to submit a ticket to the support agents, who can provide any unnoticeable problem ongoing with their server connection to the game.

Most Importantly, you should also navigate towards the Official Twitter Page of Multiversus, where the developers provide all important information and updates about the game. It also includes any sort of maintenance schedule as well as known bugs or glitches affecting the game.

More often than not, users trying to play multiplayer games will indeed have weak or unstable network connections, which will cause lag and other issues to occur in the game. Multiplayer games like Multiversus involve using a P2P connection (Peer-to-Peer Connection) to simulate a connection to its servers with ease.

So not having the proper amount of bandwidth will decrease your overall stability of the game. This will, in turn, cause internet-related issues inside the game as well as high latency levels, which will cause lag and ping spikes.

It is advised that you use a 4MB internet connection which is the bare minimum that you need to run online games efficiently. We highly recommend investing in an ethernet cable connection. It is much better than a wireless connection that will undoubtedly help provide a huge boost in internet speed.

Speaking of which, another reliable workaround revolves around using a Virtual Private Network. It stands for VPN in short, and it allows users to gain access to inaccessible sites or networks with ease remotely.

Multiversus is not accessible to download in quite a few countries, so players are having a hard time opening the steam page of the game and trying to install it. It is here where you can quickly use a VPN connection that can also help in alleviating the network errors of the connection not working in Multiversus.

We suggest using a verified VPN service, unlike the free ones. Users are in luck as most premium VPN services such as Nord VPN and Express VPN offer free trials, which can help you decide if you want to use them or not. According to reports on Reddit and Discord, it is a workaround that has helped quite a few players run it smoothly.

If all else may fail, we recommend fully reinstalling the game or downloading the PS4 version if you’re on the PS5 and vice versa for all PlayStation users. It is by far the last option that you are required to take if the connection errors are repeatedly occurring for you.

Steam Users can opt to simply reinstall the game via VPN so that the game does not face any issues while downloading the necessary files needed to operate the game. The game is only about 8 Gigabytes on both Playstation versions and Steam, so you should not face too much hassle in reinstalling it.

Multiversus is no doubt sweeping the globe and genre as of late. The game has superb fighting mechanics coupled with the fact that each character has their gimmick and combos to learn and adapt. It was unexpected that the game would gain so much popularity to rival others in its genre like Smash Bros Ultimate.

However, Multiversus launched in an unstable state. The game was previously in multiple alpha tests as well as a closed beta right before that had a balancing patch conducted on it. We can only hope that WB and the Developers allow more feedback and discussion on bugs and glitches of the game.

It isn’t any better knowing that the game is region-locked in a few countries, and there is no indication when WB will permit access to the game so players can enjoy it without using the means of a VPN or a different account.

This concludes our guide on how to fix the connection not working in Multiversus. We hope the fixes we have enlisted can help you potentially resolve the network-related issues as soon as possible.

Other than that, you can hope to wait for more updates from WB or contact them for further support, as mentioned previously. Let us know in the comments box below if you are enjoying the game so far, and if so, which is your favorite character, and who would you like to see get added in the future?

Next: Could Not Connect to Steam Network