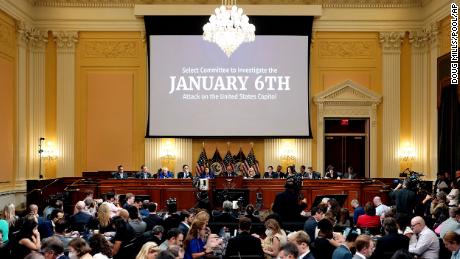 AKDSEO July 14, 2022
In the latest episode of its limited season television event, the House select committee on Tuesday traced Trump’s links to and inspiration for far right-wing groups that came to Washington to help his mob smash its way into Congress in early 2021. These were the forces that heeded the ex-President’s call to “fight like Hell” to thwart President Joe Biden’s election, including the Oath Keepers militia and the Proud Boys he once told to “stand back, and stand by” on national TV.

“What else is he going to do if he gets elected again?” former Oath Keepers spokesman Jason Van Tatenhove asked during testimony in which he warned that the ex-President would “whip up a civil war among his followers, using lies and deceit” if he launches another campaign for the White House in 2024.

The scenario he raises is hardly hypothetical since Trump and his true believers never halted his assault on democracy. The former President is escalating his lies about non-existent voter fraud in 2020. He’s salivating about another presidential campaign he would use as a new platform for his misinformation. Countless Republican candidates are running in the midterm elections on his lies about a stolen presidential election.

Doubts Trump sowed about election integrity have triggered recent showdowns over certifying results in New Mexico and Pennsylvania and a barrage of state laws that make it harder to vote and easier to interfere in results. And the Trump wing of the Republican Party is still marching toward authoritarianism. For instance, the Conservative Political Action Conference has invited Hungarian strongman Prime Minister Viktor Orban, who rolled back judicial independence, press freedom and democracy, to a Texas conference next month at which Trump is also slated to speak.
And in a stunning coda to Tuesday’s hearing, committee Vice Chair Liz Cheney, a Wyoming Republican, said that Trump had placed a call to a witness not yet seen in the hearings, in a possible case of attempted tampering that has been referred to the Justice Department.

How Trump tapped into extremism under the surface of US politics

This continuing effort to undermine American institutions and the rule of law is showing that Trump’s threat to democracy didn’t end in 2021. Whatever impact the committee has on the ex-President’s future political prospects, and whether or not he ends up facing criminal charges, there’s a sense that while documenting Trump’s past transgressions, the committee is also racing to keep up with his new ones.

The subtext of Tuesday’s hearing was an effort to expose a seam of far right-wing extremism that exists below the surface of American political life through questions about the militia-style training and aspirations of the Oath Keepers. In retrospect, Trump’s frequent equivocations about such radicals and White supremacist groups and his violence-laced rhetoric at rallies come across as the gradual legitimation of the use of violence to promote a political end. His incitement reached its apex on January 6, 2021.

This is especially frightening since it mirrors the tactics of foreign despots and extremists in fractured societies abroad where democracy failed. And there’s no sign that the ex-President would abandon this stew of extremism in a future political campaign. His past conduct suggests exactly the opposite.

The impression that was left from Tuesday’s hearing — particularly the details of a heated Oval Office meeting in December 2020 — was not just that Trump was in the thrall of fanatics with ridiculous plans to steal the election. He was one himself. And it raised the question — especially since more mainstream members of his inner circle have now broken with him to testify — about the caliber of people who would surround the ex-President if he succeeds in a quest to reclaim power in 2024.

Tuesday’s hearing also implicitly raised the question of why members of such extremist groups have faced justice for their actions on January 6 in multiple court cases while the former President continues to evade legal sanctions for inciting the riot. One of the convicted Capitol rioters Stephen Ayres, testified that he showed up specifically because he was upset after hearing the ex-President’s claims that the 2020 had been stolen.

Yet as shocking as Tuesday’s revelations were, and despite strong suggestions that Trump’s words, actions and the activity of some of his most committed enablers helped spark the riot, the hearing did not contain a single moment in which Trump or a proxy was shown to have ordered the extremists into action or knew for certain what they would do. That absence of proof of intent will play into the raging debate over whether the committee has produced a case that could stand up in criminal court after any Justice Department inquiry.

Still, the political case that the committee is presenting to the public is compelling and may already be influencing the ex-President’s political strategy. Trump is considering launching a 2024 campaign as early as this month, partly to allow him to present his own high-profile defense against the committee’s findings, CNN’s Kristen Holmes reported. This is one indication of how the extraordinary catalogue of evidence that the panel has stacked up — despite efforts of pro-Trump Republicans to discredit it — could play into the run-up to November’s midterm elections and the 2024 White House race.

The next step in a multi-layered case

Tuesday’s hearing laid out fresh evidence about Trump’s complicity in the January 6 rally. It teased out connections between the ex-President’s supporters, like Roger Stone and former national security adviser Michael Flynn, and extremists. It featured new testimony collected from former White House Counsel Pat Cipollone last week, which, although at times was restricted by executive privilege claims, further damaged the ex-President because it exposed his madcap and desperate attempts to cling to office.

The hearing included a barely believable account of a meeting between the then-President and outside advisers, including lawyer Sidney Powell, that descended into a profane shouting match with West Wing officials about schemes to overthrow the election. The committee also played testimony from former Trump White House aide Cassidy Hutchinson, who said her boss, ex-chief of staff Mark Meadows, escorted Rudy Giuliani out of the White House late on that December evening so he could not plant any more ideas in Trump’s mind.

That December meeting played an important part in Tuesday’s narrative because it added another layer to the case about Trump’s incitement of the January 6 crowd.

Previously, the hearings have advanced a theory that Trump knew his election lies were false because he was told so by multiple officials. But he pressed on, trying to find ever more extreme associates who would tell him what he wanted to hear. Then he turned to the futile attempt to get ex-Vice President Mike Pence to block Biden’s succession with non-existent constitutional tools.

Tuesday’s testimony represented an attempt to show that when those avenues failed to overturn the election, according to the committee, Trump turned to mob rule. The panel’s case is that Trump gathered the crowd, gave it a grievance with his election lies and incited its march on Congress, even with the knowledge that many of its members were armed.

Cheney argued that this pattern of behavior was evidence of culpability and warned against an emerging line of defense in Trump world — that the President was led astray by unscrupulous advisers like Powell or attorney John Eastman.

“This, of course, is nonsense,” Cheney said, adding that Trump was a “76-year-old man and not an impressionable child. Just like everyone else in our country, he is responsible for his own actions and own choices.”

The Wyoming Republican’s latest sharp warning sounded like a veiled suggestion to the Justice Department that Attorney General Merrick Garland should consider a criminal investigation of the former President over his actions on January 6. But in itself, it did not really answer the question of whether there is evidence that Trump ordered, rather than merely incited, the Capitol riot — a distinction that could be important in court.

One of Cheney’s Democratic colleagues, Maryland Rep. Jamie Raskin, a constitutional scholar, put the ex-President’s actions into a wider context, as he said his attempt to destroy US democracy was exactly what the Founders had in mind when they built democratic safeguards as they forged a new nation in the 18th century. Arguing that political leaders who incited mobs often turned into tyrants, he posed a question for Americans as Trump is apparently about to seek a return to power.

“The crucial thing is the next step. What this committee, what all of us, will do to fortify our democracy against coups, political violence and campaigns to steal elections away from the people,” Raskin said.

“Unlike Mr. Ayres and Mr. Van Tatenhove, people who have recovered and evolved from the descent into the hell of fanaticism, Donald Trump has only expanded on his big lie.”